Not everything in the world makes monetary sense. Anything that reaches straight for your heart seldom consults the brain. And anything that appeals to the heart doesn’t want to be quantified, just like this Mini Cooper S Paddy Hopkirk Edition. Allow me to do the hard work for you to tell you what this car is really about and how it’ll change your perception of what this car really is. I wouldn’t want to stress on the Paddy Hopkirk nametag too much as it’s a visual special more than being mechanically superior, so let’s address this as a regular Cooper S.

The whole USP of Mini is to make you feel special and this Cooper S is a truly special car, a feat only a few cars on this side of 1 Cr achieve. Everything you see, everything you touch, and everything that surrounds you don’t feel like it follows a general norm of car design. The touchpoints keep varying in feel and quality as you run your hands around the cabin but everything in your visual vicinity feels quality. The toggle switches are a definite favourite of mine.

But a Cooper S is much more than a visual diva. What is it like to drive?

Well, to put it simply, it’s one-dimensional. It’s a car that does one task exceedingly well but will pull your nerves when you ask anything more. If you have a particular type of road in which you drive this car in a particular way, it’s a magnificent car to drive. And what’s that ideal scenario?  Driving around twisty back roads fast and hard, really hard. This car doesn’t know the meaning of the words peace and calm. But spend 5 mins driving the Cooper S the way it wants and you’ll forget those words too.

I was lucky enough to be able to drive this car around the roads of Pala, Kottayam, roads that feel like they were designed with the Cooper S in mind. And this was important because I really believe you need to reside somewhere that has roads like these to really experience the Cooper S, a luxury that most of us can’t have. The Cooper S, as I previously mentioned, is a car that begs to be driven hard and it keeps reminding you.

Take the steering for instance. It’s a heavy steering this, carrying a good weight around corners, giving you great on-centre confidence. This surprised me as you don’t imagine a car with such compact proportions to have such heavy steering. I can’t imagine this being any easy to move around in city streets and rush hour scenarios. But it’s exactly what you want when you really push the car. It makes you work harder than most cars and I love it. The weight is also so accurately progressive, translating all the right reactions of the road.  I wish it had more feedback but most people wouldn’t make a fuss as the weight makes up for it. I should also address the gorgeous JCW steering wheel, a Paddy Hopkirk addition that this car has. It’s a must-tick box for any Cooper S. It’s up there with the best steering wheels I’ve held. But turning and feeling this steering wheel is one thing. The way the car turns in return is another ball game altogether. The terms ‘It turns like it’s on rails’ and ‘ Feels like a Go-Kart’ are some of the most overused automotive jargon around. But they apply here. The turn-in is fantastic, with loads of grip in every corner. You’re instantly reminded of how small this car really is. Place it in any corner, at speeds more than you’d normally carry and the car somehow makes it. The biggest contributor to its great dynamics has to be its stiff damping. And I should admit, the suspension of this car is undeniably stiff. This makes it a great performer when you’re really ringing its bells but will drastically reduce the longevity of your spine when driven around city streets. It’s almost too stiff than needed in every single scenario and this might be a deal-breaker for old-aged customers. In an attempt to soften the blow, I should point out how good the seats are. Perfectly bolstered and hugs you in every corner. But still doesn’t mask the stiffness as you’d want.

All this stiffness should make it a fun car when you drive it hard on smooth windy roads right? Well, no. Let me explain. The stiff suspension makes the car follow the natural path of the road, forcing the car to stick to the tarmac even when the road rises, dips and has a curvature to it. This makes it a hard car to drive as every input you make has sudden consequences. While people glorify how lack of body roll is ideal and will make every car a dynamic fest, they’re talking about regular passenger sedans and SUVs, where anything less than a roll of a bus is ideal. Driving the Cooper S, I was wishing for some body roll. The lack of it makes it a more serious performer, not necessarily fun. Case in point, Race Cars around the infamous Nurburgring run a softer set-up for their dampers to allow the car to roll with its crests and kerbs. A car with a stiff setup doesn’t necessarily mean it’s better and I know for a fact the Cooper S would be more fun if it were softer.

Let me shift focus to the heart of the matter, the 2.0 Turbo Petrol tucked under the cuteness of its shell. On paper 189 hp and 280 Nm are strong numbers and it’s a fast car by all means. I just couldn’t feel all 189 of it. And that’s purely down to the gearbox. This has a 7-speed Steptronic Torque Converter sending power to the wheels and this is for me the weak link of the Cooper S when considered a performance car. Dress up a goose to be a swan but it’s bound to quack at some point. This is a good gearbox for most daily purposes. It’s smooth, refined and masks the sensation of gear changes. It’s only when you push it you realize it doesn’t quite cut it. For starters, in auto mode, it’s always one gear higher than you’d expect and this dulls the experience coming out of the corner. It has a sense of calmness, which is ironic given the hyperactive chihuahua character of the car. You’d imagine things would be better when you take over manual controls but no. There’s a delay to every paddle input and reels in a sense of disconnect. This engine is begging for a DSG and it would have elevated the experience. Again, I should stress this is a perfectly fine gearbox for most of your commute duties but then why would you drive around a Cooper S for it. But hey, it pops and crackles when you downshift or take your foot off the throttle if that tickles the humour in you.

I haven’t been kind to the car yet and by this point of reading, you’d be wondering what’s the point of this car based on my words. But here’s the thing. The heavy steering, the stiff damping, the power, its mostly good gearbox, its sweet interiors and its undenying Mini looks, all combined make it a fabulous car. I sense a visible confusion. When you combine all of these characteristics, it becomes a car, unlike anything I’ve driven. Brace yourself for a wild comparison I’m going to draw. This feels like a junior supercar if that’s an acceptable term. Looks special, feels special, is fast and is hard to drive around. See what I mean?

For a second, forget it’s a small hot hatch that’s dressed up in fancy jewellery and imagine this to be a cut-price sportscar. And that’s the only way you’d be able to digest its ludicrous pricing. This car in all its glory is 55 lakhs when it hits the road and that begs a big gulp. Now you might understand why I had to start this review with what the mind sees and what the heart wants. This doesn’t make any sense financially as a fun-to-drive hatchback but it somehow does when you think of this as a heavily scaled-down exotic. Well, this theory could be applied to your Honda City and you could call it a scaled-down S class but you know that’s pushing it. I’ve never had to change my perspective to see the financial sense of a car but here, it works. There’s nothing like it. This is a horrible city car as it doesn’t have any space for practical purposes and you really can’t see out of it all that well. The ride would set a bad mood the whole day as you crunch numbers on your computer. The Polo GTI instantly wins every single day as a more sensible and VFM product to buy. It’s equally fast, is comfortable and adequately fun. But the stress on the word product. It’s exactly what the Mini isn’t. When you really ring it, the Polo crumbles. On paper, the Polo GTI should wipe the floor but cars are driven on the tarmac and the Cooper S is an experience to drive. The Mini has one case point where it’s exceptional Vs the Polo which is better in every practical scenario. Cooper S appeals to the heart and the GTI convinces the mind.

So here are my words for you, if the Cooper S fits your lifestyle, if you have instances to maximize what this car offers and if you can afford to please what your heart wants, please buy this overpriced piece of joy. 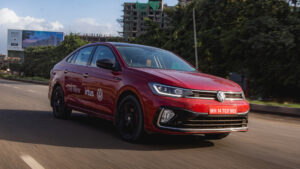