The world has suddenly been influenced by the Koreans and I believe this trend started way before we realise it. With the world going “GAGA” over the Korean culture and musical affinities, the automobile market was influenced way before, at least in India. Hyundai has been playing a major role in offering features in mass-market automobiles. Coming to the present the Koreans are ready to bring another technologically advanced automobile to the Indian market, The Hyundai Ioniq 5.

Well, I won’t say that we haven’t seen something like this already; because we already have the Ioniq’s sibling in the Indian market, the Kia EV6. But what I am trying to suggest is, we should be excited to see what Hyundai will offer and how will they position their product compared to their half-sister. Only time will tell us if the 2022 car of the globe makes a difference in the Indian market.

The Ioniq 5 is a crossover that seems to be inspired by the movie “Tron” as far as my opinions are concerned. The subtle yet sharp, U-shape DRLs complement a front with soft edges but with big creases on the bumper, and under the headlamps. The sliver skid plates in the lower half of the bumper with 2 massive dummy rectangular ducts seem to prove the crossover-ish point for the Ioniq 5. To the side, the car follows a sliver body cladding starting from the front to the rear. The Car also has Z-shaped crease lines which make you feel like it still has some drama from the present. The rear of the car is in sync with the front which again, brings a very futuristic feel to the car.

Propelling the Hyundai Ioniq 5 is a 72.6kWH battery pack, mated to a permanent synchronous motor. The powertrain output is 216bhp and 350Nm of peak torque, which is channelled to the rear wheels via a single-speed transmission. It gets an ARAI-certified range of 631km on a single charge and can be charged from 10-80 per cent in just 18 minutes using a 350kW DC charger. The Hyundai Ioniq 5 rivals the Kia EV6, BMW i4, Mercedes-Benz EQB, and Volvo XC40 Recharge. But it has the upper hand as the car is priced very aggressively, starting at Rs. 44.95L. 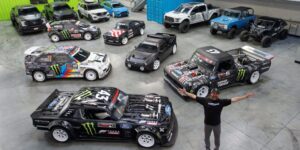